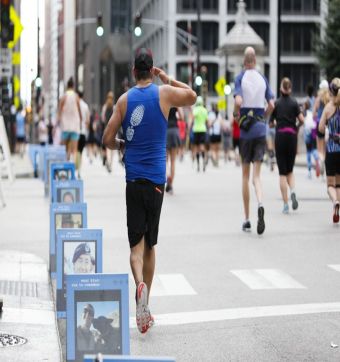 Hunt Heroes Foundation (HHF), the non-profit organization founded by Hunt Military Communities (HMC), was honored to have served as a major sponsor for the recent wear blue: run to remember fundraising gala held recently in Chicago.

wear blue: run to remember uses the power of community and the accessibility of running and walking for community members to serve as a living memorial and honor generations of America's fallen heroes.

This fundraiser allowed wear blue to continue its focus on increasing support of its programs, in particular, its Gold Star Youth Mentorship Program (GSYMP). The GSYMP is a community impact program benefitting children of fallen service members. wear blue: run to remember is dedicated to providing each registered Gold Star child a military mentor. This mentor provides his or her youth a glimpse into the life of service that defined his or her fallen parent while participating in the life-affirming action of running. This positive relationship and living memorial promotes continued healing and growth. The program currently operates for families in the Joint Base Lewis McChord, Fort Bragg, and San Antonio regions.

Currently, HHF is partnered with wear blue: run to remember, a national nonprofit running community that honors the service and sacrifice of the American military. Through generous donations, HHF has donated more than $30,000 to wear blue and helped orchestrate more than 50 Memorial Day runs this year alone throughout the nation.

As part of the weekend events, representatives of HHF volunteered at the wear blue Mile at the Chicago Rock and Roll Half Marathon. The mile is lined with posters filled with faces of fallen service members, followed by volunteers holding flags adorned with their names.

HHF encourages growth and development by funding projects that address community challenges in the areas of health, education, housing, and overall community support. The organization's focus is to improve the quality of life for military families who sacrifice so much day-in and day-out.

"We were honored to be a part of the wear blue event which served as a stark reminder why it is so critical to continue supporting our military members and their families," stated John Ehle, President of HHF. "With more than 7,000 Service Members killed since the Global War on Terror began, wear blue helps ensure their service and sacrifice are not forgotten. We look forward to a long relationship with their team."

HHF helps bring a focus on supporting our residents and employees in reaching their best potential through partnerships, donations, and activities.

About Hunt Military Communities
Hunt's Military Communities division is a 50-year partnership created between the Department of Defense and Hunt through the Military Housing Privatization Act. As part of the partnership, Hunt owns approximately 52,000 units spread across more than 40 military installations on Navy, Air Force, Marine Corps, and Army installations and is the largest privatized military housing developer in the nation. For more information, visit www.huntmilitarycommunities.com.

About wear blue: run to remember:
Our running community unites and supports the military and their families, veterans, Gold Star families, and civilians through active remembrance and meaningful relationships. We motivate and empower individuals to healthier, more inspired living. More than 500,000 military members, their families, Gold Star families, veterans, retirees and civilians have participated in wear blue events since its inception in 2010. www.wearblueruntoremember.org.